2,000 years ago, Anos created the Seven Demon Elders from his own blood, including Ydol. After Anos's sacrifice, the Seven Demon Elders co-operated with the Hero Kanon to create the fictional Demon King Avos Dilhevia as a decoy to protect Anos when he reincarnated. Kanon then fused six of his sources with 6 out of the 7 demon elders, including Ydol. He also erased their memories so that Anos wouldn't find out about their plan after reincarnating, as the Elders could not lie to Anos.

As part of the Great Demon Sword Training, Gaios Anzem and Ydol personally appeared to instruct Class 1-2. After Anos impressed Gaios, Ydol and Lay Glanzudlii are caught in their spar, becoming a two-on-two fight. Lay chooses to fight against Ydol, since Ydol's two swords would put him at a disadvantage. As their swords clashed, Lay slowly chipped away the durability of the twin swords, thus shattering at the end. Ydol then loses the will to continue, asking who can treat the two of the Seven Demon Elders like children.

At the conclusion of the Demon Sword Tournament, Melheis Boran ambushed the injured Anos and Lay Glanzudlii and brought them to another dimension. Melheis, Gaios, and Ydol planned on overwhelming Anos, but suddenly Gaios and Ydol are both beheaded as Anos stops time on their bodies. Lay was faking his fatal injury and took them out by surprise, Anos and Lay then worked together to defeat Melheis and bring him back to his senses. Anos managed to extract the two unknown sources inside Gaios and Ydol, but they are destroyed by an unknown masked person. Melheis then revives both of them.

When Avos Dilhevia came back and declared war on Azeshion, Ydol was among the four Elder Demon Emperors who were on Anos' side. They followed him to Eiyan Hill, where Avos' army had built demon king castles to serve as their headquarters. While Anos headed towards the main castle, Ydol and the others stayed to fight the three Elder Demon Emperors who sided with Avos.

When everything was over, Anos teleported everyone back to Dilhade. 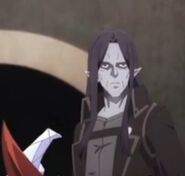