View source
watch 01:36
We're Getting Mutants in the MCU - The Loop
Do you like this video?
Play Sound

The eighth volume of The Misfit of Demon King Academy light novel series written by Shu and illustrated by Yoshinori Shizuma.

Fate stretching for 2000 years... All the keys to it are in Anos' lost memories!

Thanks to the wish power of united people, not belonging to the three opposing powers, the underground depths escaped destruction and peace reigned. But there are still all sorts of unconstrained riddles in the Anos heart... The truth about goddess of creation death, the remaining eight chosen by the god, and finally - identity of the guy who called himself the father of the demon king.

The group goes to the underground depths again to get the keys to these mysteries, and learns about the existence of "Creation Star Erial", in which the lost memories of Anos are sealed. But they are hidden in the lands where is an influential demon of the "mythical age", nicknamed the "Sorcerer King" operating behind the scenes. 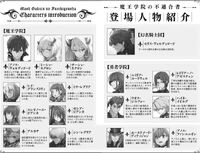