Maou Gakuin Wiki
Register
Don't have an account?
Sign In
Advertisement
in: Characters, Male Characters, Human, Humans from 2,000 years ago

View source
watch 01:36
We're Getting Mutants in the MCU - The Loop
Do you like this video?
Play Sound

Kanon (カノン, Kanon?), commonly known as Hero Kanon (勇者カノン, Yūsha Kanon?), was the legendary human hero who fought against the Demon King Anos during the Great War that occurred 2,000 years ago. Kanon was famous for having seven sources that made him nigh-immortal, as well as being the wielder of the legendary holy sword, the Spirit God Human Sword Evansmana.

Kanon was a well-built young man with dark blonde hair and green eyes. He wore a blue-colored nobleman attire with silver armor and cape on top.

Kanon was a kind and courageous person, as he was noted to have the qualities of a true hero, that many looked up to such as his willingness to fight and die for those who could not fight for themselves, as Kanon was stated to have great charisma that rallied people to him and allowed him to give hope to them. Kanon was sensitive to the hearts of others and very perceptive about the feelings of others, as he could see what people were trying to hide behind their outwards appearances. It is noted that he had great willpower, as he was able to continue battling against Anos and continuously having his sources destroyed, despite the agonizing pain it would cause him. Kanon strived for peace and was compassionate to even his enemies, often letting demons go if he didn't have a reason to kill them. Even after all the hardships that he went through because of Anos during the Great War, Kanon was able to trust in him and his proposal for a peaceful world. After being killed by Jerga's allies, Kanon decided to work alongside demons instead, who were more willing to forgive and forget.

As revealed by Lay's deeper and hidden feelings, Kanon was in truth suffocated by the duties of being a hero. As a country boy, all he ever wanted to do was to swing the sword. He was never strong nor righteous, he was afraid of death and never even wanted to kill. But more people had died by his hands than the people he managed to save. But even so, someone had to bring back hope to the people, even at the expense of themselves. As he kept dying and reviving, over and over again, he one day realized that the people had the Hero Kanon, so who did he have? Then one day someone reached out their hands to him, the very person he was supposed to kill, the Demon King of Tyranny Anos Voldigoad, his "only hero".[1]

Kanon was trained by the Commander Jerga and was the great hero of the human race during the war against the demon race 2,000 years ago. Kanon was unique in that he possessed seven sources: one main one and six extras. As long as one source remained, Kanon would always be able to resurrect himself and his other sources. During the Great War, he met Anos and battled him several times, leading them to gain mutual respect for each other.

Near the end of the war, Anos came to Gairadite to invite Kanon to Demon King Castle Delsgade, where they would discuss how to peacefully end the war. Jerga tried to attack him but was easily defeated, causing Kanon to come and heal him. He offered to return a source to Jerga, but the latter declined as it was his decision to give Kanon a piece of his source. He bet everything on Kanon and told him that one day, Kanon would beat the Demon King. When Kanon asked him about Anos' offer, Jerga doubted it and told him that his kindness was wasted on demons, as he shouldn't feel guilty about killing them. Jerga then told Kanon to leave him and go reassure the people that the Demon King had left, so he did.

Later, Kanon along with the Great Spirit Reno and the Goddess of Creation Militia met up at Delsgade. Rather than fight them, Anos offered a plan to stop the war and bring peace once and for all. After a bit of hesitation, Kanon accepted the deal and killed Anos, allowing the Demon King to cast Beno Ieven using his life force, thus creating four walls to separate the races for the next 1,000 years. Before dying, Anos told Kanon that he would reincarnate in 2,000 years, promising him to be his friend if they ever met again.

At the end of the war, Jerga, who still held a deep hatred towards the demons, wanted to set up the Hero Academy to pass his resentment to the future generations. However, Kanon opposed the idea and was against the foundation of the Hero Academy until the very end. He insisted that the Demon King gave away his life to bring about peace, but not many people believed him, even though Kanon was the Hero. Jerga abandoned his life and passed his resentment, hatred, and revenge against the demons through the magic Asc. Kanon strongly opposed the magicalization of Jerga.

While alone initially, Kanon would eventually gain many supporters who wanted to put grudges aside and work towards peace. However, Jerga's allies waited until Kanon's guard was down before killing him. Because of his seven sources, Kanon revived almost immediately. Seeing that humanity would not forgive Anos, Kanon created the fictional Demon King Avos Dilhevia as an outlet for their resentment. He then talked and sometimes fought with the demons to persuade them into helping him. Since the demon race adored Anos, they understood him better than the humans, thus they believed the Hero's words and decided to forget Anos so that the fake Demon King could take his place.

As expected, Anos' confidants could not forget his name, so they moved away from Dilhade. Even the mighty demons who were in conflict with him promised that they would remain quiet until he came back and everything was over. With their consent, Kanon went on to fuse six of his sources with the Seven Demon Elders . The only exception was Melheis Boran, as Kanon's last source belonged to himself. Nevertheless, all seven emperors opted to have their memories erased since they could not lie to Anos. If he ever came into contact with them after reincarnating, he would learn of Kanon's plan.

With his remaining source, Kanon reincarnated over and over again and eventually became a pure-blooded demon, Lay Glanzudlii.

Jerga was Kanon's teacher. Despite having a high level of respect towards Jerga, Kanon was openly opposed to Jerga's desire to pass his hatred on to students of the Hero Academy.

Even though they started as enemies, the two developed a mutual respect for each other and agreed to become friends after they reincarnated. Their relationship is that similar of brothers-in-arms despite being on opposing sides.

Kasim was Kanon's senior comrade whom he trained alongside when he join the Demon King Subjugation Army, with Kasim originally being more talented then Kanon at both swordsmanship and hero magic. While the two were close friends during their training, Kasim began to resent Kanon for his ability to wield Evansmana, which made him be chosen as the leader of the Demon King Subjugation Army, much to Kasim's envy. Kasim would begin to try to undermine Kanon and the heroes, such as spreading stories about how a weakling cannot be a hero. Kanon, alongside Jerga, would attempt to plead with Kasim to stop his actions, but a battle broke out in which Kasim was supposedly destroyed by Jerga. The ordeal with Kasim took a slight toll on him, as he regretted not being able to reconcile with him. 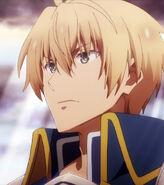 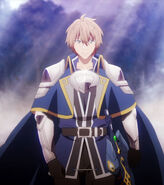