Ivis looks like a skeletal mage. He wears a robe that covers his entire body and a headpiece with side ornaments, leaving only his skeletal/mummy face to be seen. He doesn't look to have a bottom jaw and speaks through a jaw-mouth ornament on his chest.

Ivis is quite smart, capable of developing complex fusion magic. He became wary of Anos when he learned that someone can oppose him. When Anos explained who he was, Ivis remained suspicious as he knew what Anos was capable of.

2,000 years ago, Anos created 7 demons from his own blood, which would later become known as the Seven Elder Demon Emperors and among them was Ivis. After Anos's sacrifice, the Seven Elder Demon Emperors co-operated with the Hero Kanon to create the fictional Demon King Avos Dilhevia, with the intention of averting humanity's hatred from Anos when he reincarnated. Since they couldn't lie to Anos, Kanon fused six of his roots with 6 out of the 7 elder demon emperors, including Ivis, and erased their memories so that if they came in contact with Anos when he had reincarnated, he would not know about Kanon's plan.

When Sasha was born, Ivis cast the spell Separation and Fusion Reincarnation <Dino Jekses> on her in order to create a powerful vessel for the Founder to reincarnate into.

Ivis was a guest lecturer in Anos's class, going to their classroom in order to teach them about fusion magic. When he was introduced, Anos greeted Ivis like an old friend despite being warned by the teacher to behave. Ivis wondered who he was, but Anos got closer and used memory restoration magic on him with no success. Anos then used Origin Magic <Rivide> to turn back time on Ivis, causing him to remember his past, but Anos was not in it. Ivis thanked him for what he did as he learned that there was someone who could oppose him.

Anos got back on his seat and Ivis continued teaching about fusion magic. Ivis was then informed by Anos that the magic circle on fusion had a flaw, and when he fixed it, the duration of the spell increased several hundred times more. Ivis couldn't believe that someone had studied fusion magic before him, but Anos explained that it was all Ivis' work and he was just seeing it for the first time. Ivis then told Anos that there was nothing he could teach him and wondered why he was even in the school.

After class, they spoke and Anos that explained someone had changed the name of the Demon King of Tyranny and also erased Ivis' memory. Ivis conceded that what Anos said might be true, but at the same time, Anos could also be the one who had erased his memories. Because he couldn't fully believe Anos at the moment, Ivis decided he would remain neutral towards him because something about Anos was familiar.

On the night of Sasha and Misha's birthday, Ivis appeared to stop Anos from helping Misha, which would disrupt his plans since she was supposed to merge back into Sasha. Because Anos tried to change the past in order to help her, he caught the attention of the guardian god of time, Eugo La Raviaz. Eugo then fused himself with Ivis, giving him his power over time so that he can defeat Anos. In the end, Anos destroyed the roots of Eugo La Raviaz and an unknown root, discovering that Ivis' roots were still intact, so he cast <Ingal> to revive him. Anos then gave Ivis his memories of him and tasked him with investigating the remaining Seven Elder Demon Emperors in secret.

When Anos was nominated for the Magic Sword Tournament, an event that normally would not invite mixed-bloods, he secretly called for Ivis. They met up at the Cat Cafe "Matatabitei", with Ivis under his cat disguise, and Ivis reported back what he knew about the unseen leader of the unification faction and the Lognorth Magic Clinic. Ivis was then tasked to find more about his fellow Elder Demon Emperor Melheis Boran and the circumstances behind Anos' nomination.

Right before the start of the first round, Ivis was able report back about the involvement of the Elder Demon Emperors Gaios Anzem and Ydol Anzeo in the tournament behind the scenes, and also about Lay's mom, who was hospitalized at the Lognorth Magic Clinic.

On the first day of the academy exchange, Ivis met with Anos to bring him an urgent report. The remaining three Elder Demon Emperors disappeared from Dilhade, and were seen entering to human capital of Gairadite. Ivis also told him that after he arrived to Azeshion, he overheard the humans talking about the "deep darkness", a legend that seems to be about the reincarnated Demon King of Tyranny. Before being dismissed, Anos told him to chase after the missing Elder Demon Emperors.

Many days later, when Kanon's reincarnation played the role Avos Dilhevia and made his return known alongside the missing Elder Demon Emperors, he declared war on Azeshion, involving the citizens of the present into a war from 2,000 years ago, which prompted Anos to respond. Ivis was among the four Elder Demon Emperors who were on Anos' side, and they followed him to where Avos' army was stationed at. While Anos headed towards the main castle, Ivis and the others stayed to fight the three Elder Demon Emperors who sided with Avos.

When Jerga, the mastermind behind the Hero Academy and the reason why Kanon had to go to such lengths to protect Anos, resurrected; he commented on the pitiful state of the demons from now compared to 2,000 years ago. But Ivis reappeared to say that demons haven't gotten any weaker, and so he used <Dino Jekses> to return his two descendants back to their proper form, Aisha Necron. Aisha was then able to stop Jerga long enough for Anos to come back.

When everything was over, Anos teleported everyone back to Dilhade. 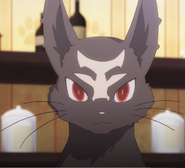 Disguised as a cat